Adventures on a Budget

We spent the first month of 2017 blissfully unaware of the goings on back in the USA, at least for the most part.  We just returned from a trip to Panama, Belize, and Mexico (Yucatan).  American politics were covered widely in these areas, especially Mexico, but we managed to stay uninformed with our minimal cell phone plan and intermittent WiFi.
It was a welcome break and a great way to bring in 2017 on a more positive note.

We will be doing some blog posts looking back at the trip.  These are all places we had hoped to sail eventually but after visiting some of the Cruiser destinations we're glad we didn't.  Details on that later.

We're back in Austin for the foreseeable future.
Looks like we'll have to start earning some money to pay for all our slacking off...
More on that later too!

A few teaser photos in no certain order: 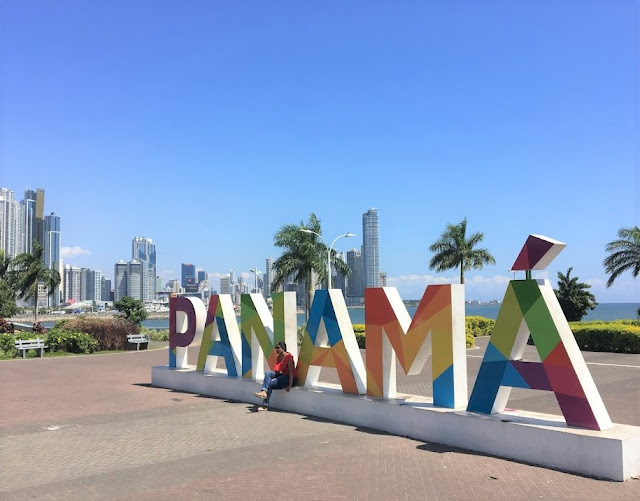 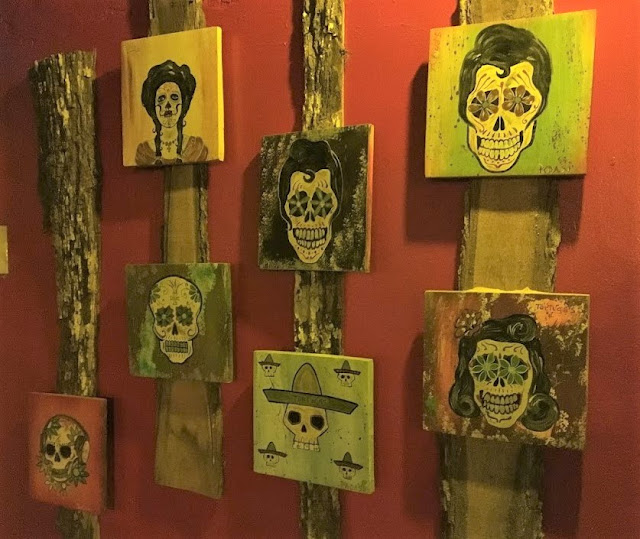 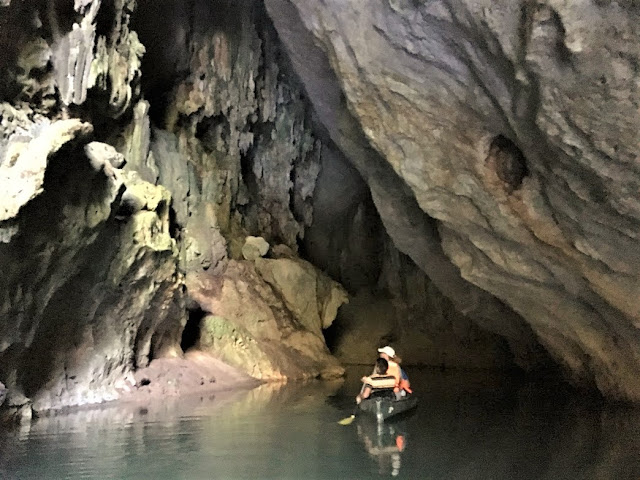 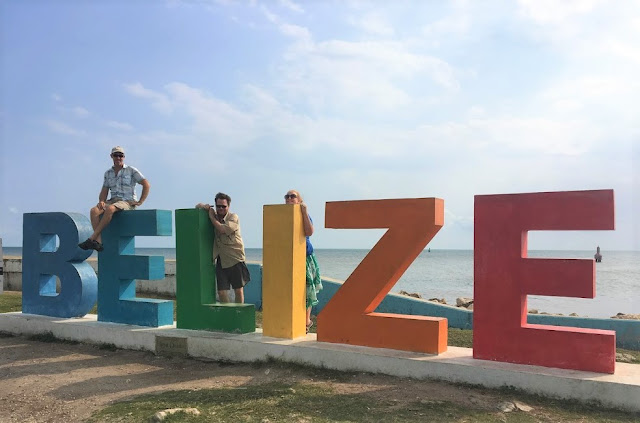 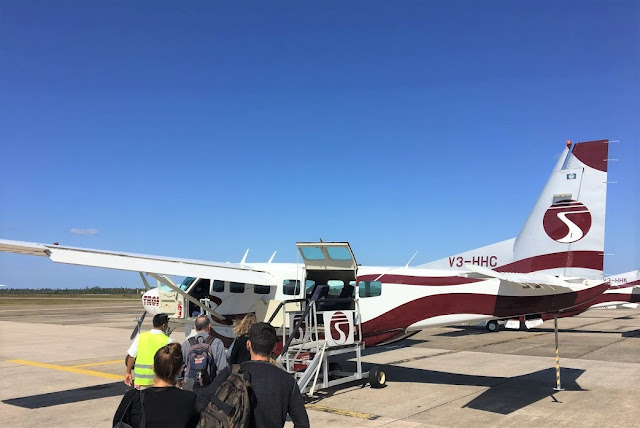 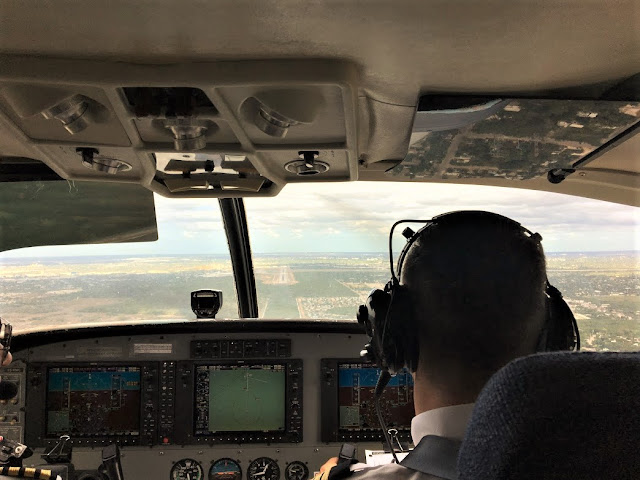 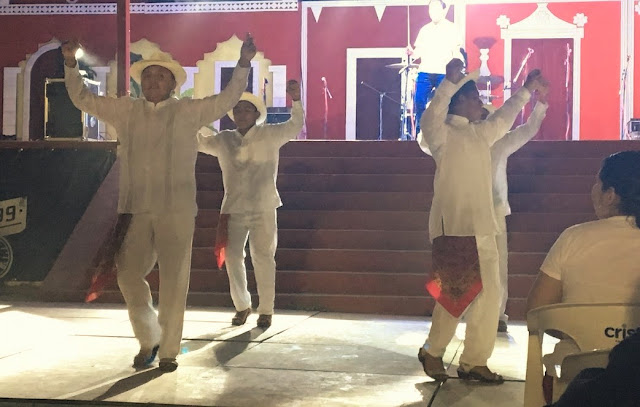 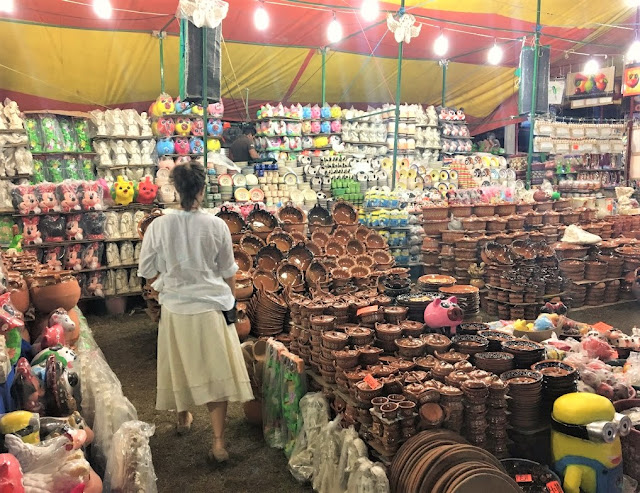 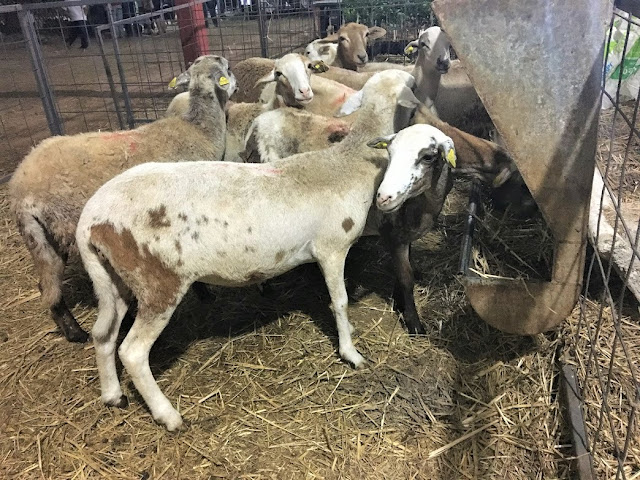 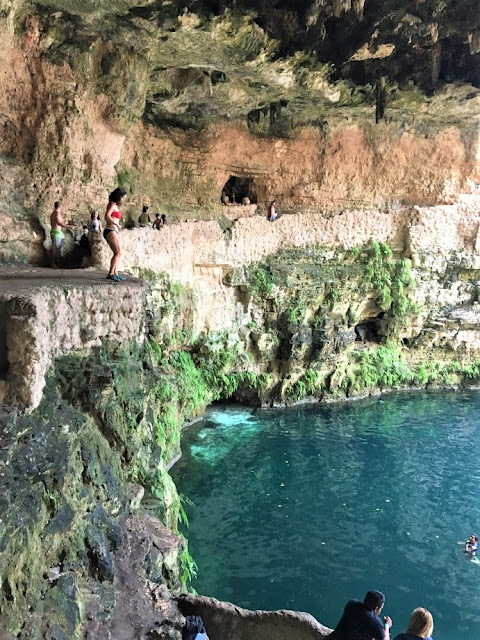 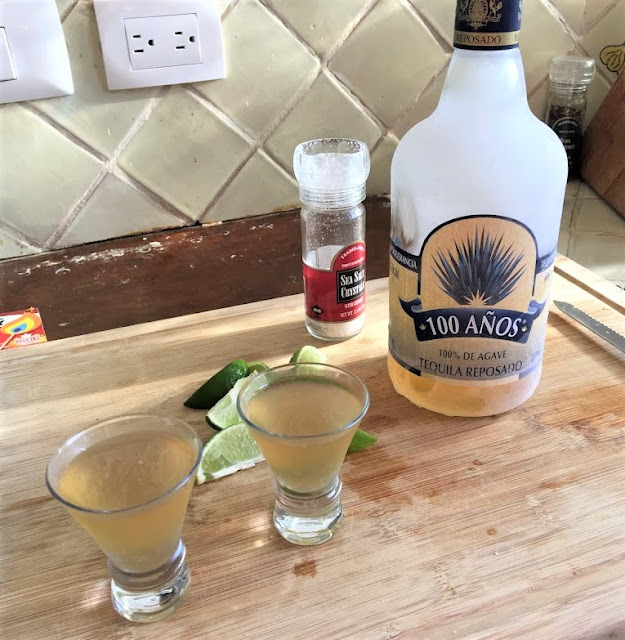 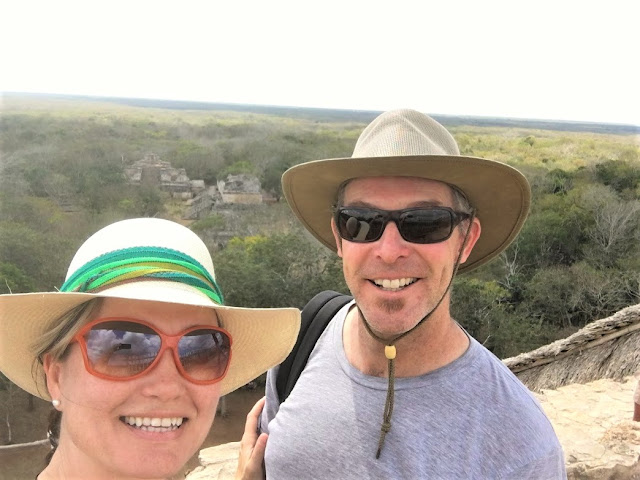 Posted by ontheroadwiththeroses@gmail.com at 10:45 AM 0 comments

Our year with a live aboard cruising sailboat wasn't entirely spent on the boat so, here's a summary of what we did:

October 2015
We purchased Wings in Punta Gorda, Florida from Dave and Dottie, a lovely couple, that immediately turned around and bought a trawler that they fixed up and now live aboard full time! 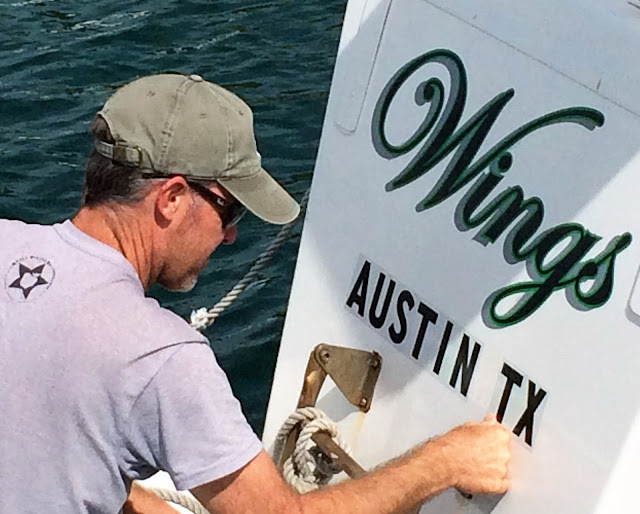 November 2015
We lived aboard at Fisherman's Village Marina, where we bought her, and sailed around Charlotte Harbor to learn the ropes.  We also took some Coast Guard Auxiliary courses. 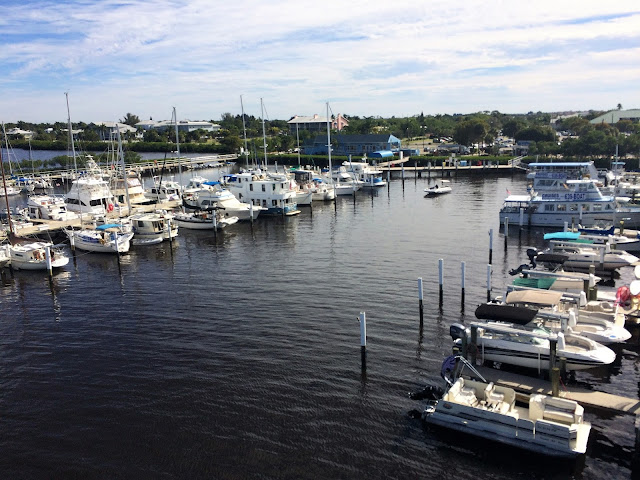 December 2015
We were in Austin for the holidays and to take care of some business. 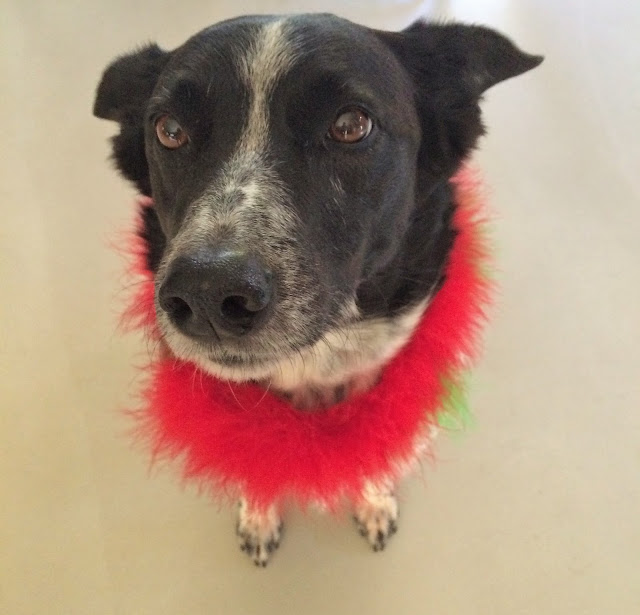 January 2016
We returned to Punta Gorda, provisioned the boat, and sailed south towards the Keys.  We took about 10 days to reach the Keys.  As has been our experience, throughout our boating time, there were weather issues... 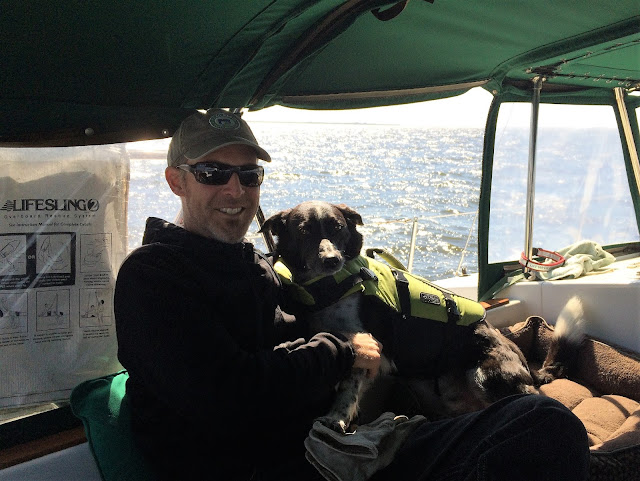 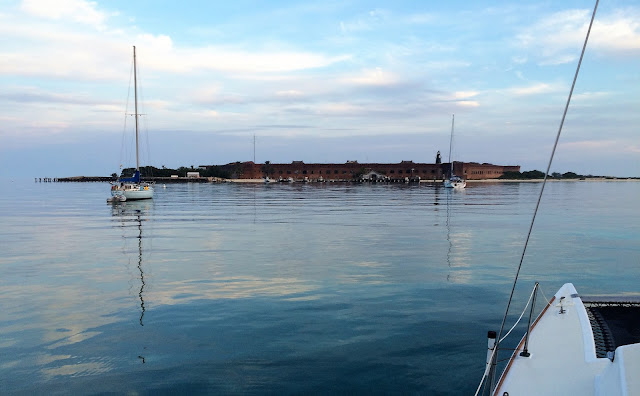 March 2016
We sailed up the Keys to Key Largo where we waited at Pennekamp State Park for a weather window to cross over to Bimini. 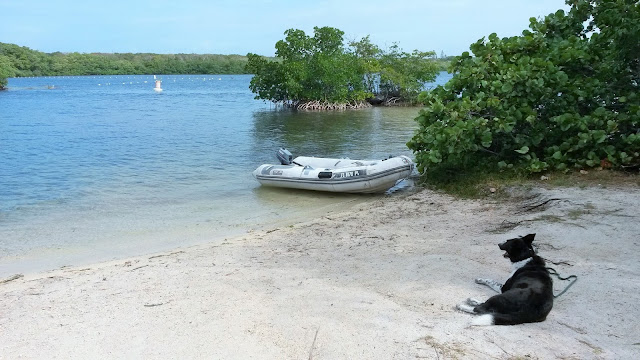 April and May 2016
In the Bahamas.  We went to Bimini, Providence Island, the Exumas, and Eleuthera.  If you read the previous few blog entries you're probably wondering "did you have any fun?".  Yes, absolutely, but it was all but eclipsed by our weather related issues... 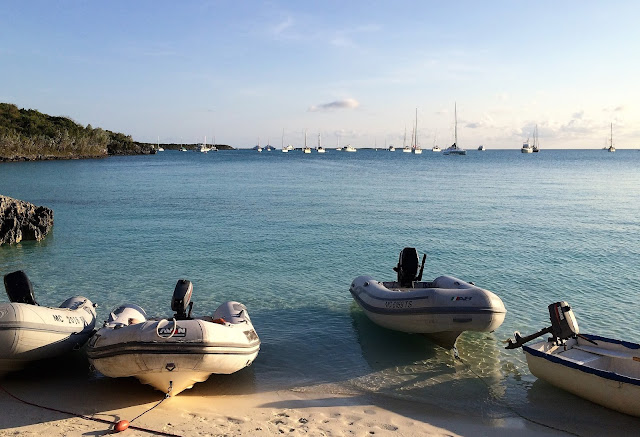 June 2016
Limped back to Florida to handle boat repairs.  Most of June was in West Palm Beach where we stayed in a borrowed condo (thank you thank you thank you Herb and Gayle) while working on Wings at Cracker Boy Boat Works.  Funny name, we know, the story is that Florida cowboys used to herd cattle with whips and became known as "cracker boys" at least that's what I was told... July 2016
Wings was back in the water and we motored her inland via the Okeechobee waterway to be stored at Port Labelle Marina between Lake Okeechobee and Ft Myers.  We might have to do a blog entry dedicated to Port Labelle Marina it's a... unique place.  We put her on the market and took a road trip to see family in Maryland and Pennsylvania in a borrowed Toyota (thank you thank you again Herb and Gayle). 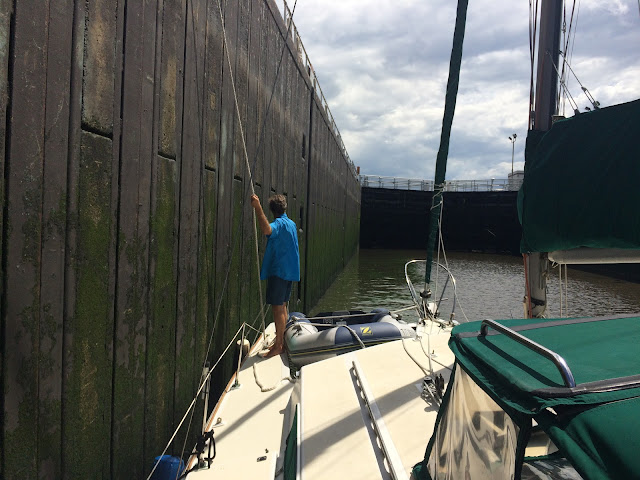 August 2016
I (Greg) stayed aboard Wings to continue repairs (not very successfully) and show her to prospective buyers, most of whom were just looky-loos until Scott and his father Wes came along.  Almost completed the deal until Hurricane Hermine made us postpone.  Meanwhile Angie took a trip to San Diego and we spent a lot of time at my cousin Beth's in Sarasota.  In fact, we spent a ton of time at Beth's while we were in Florida the whole year, thanks Beth, Jon, Ryan, Kyle, and Michelle! 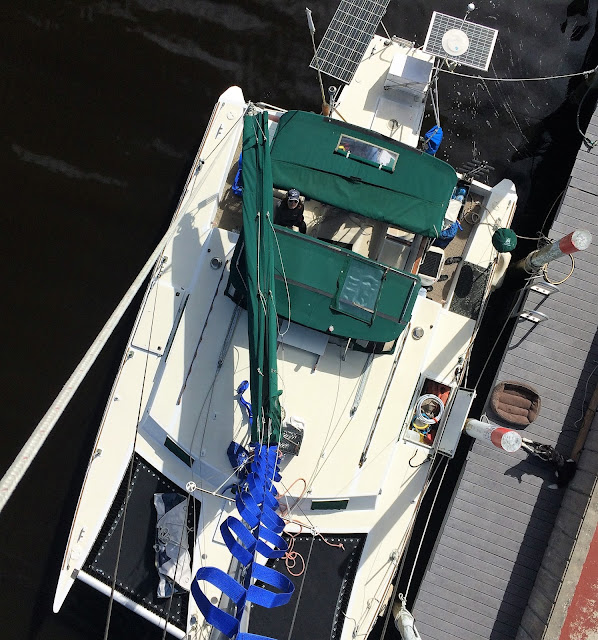 September 2016
By now we had another van and took a roadtrip to Austin, Colorado, Seattle, Houston, and points in between.  Did a bunch of camping and caught up with lots of friends and family (thanks Ryders, Wilsons, Terry, Jerry, Theo, Jason and Kay!).  Then we drove all the way back to Florida... 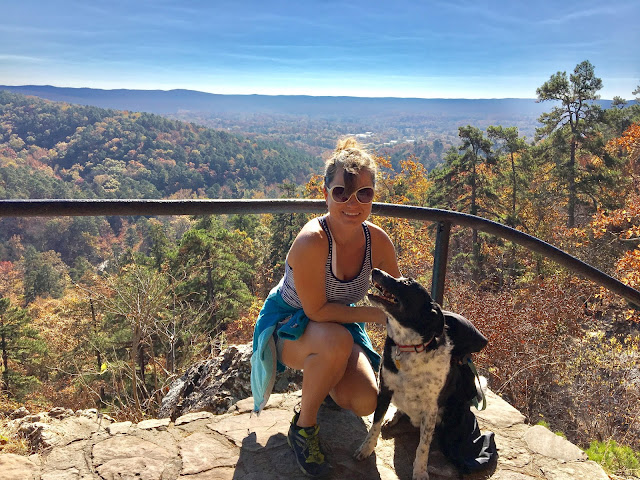 October 2016
Back to Wings to finalize sale to Scott and Wes.  Got delayed a couple of days by Hurricane Mathew but wrapped it up on October 11th.  After a thorough survey we handed Wings off to Captain Bob who delivered her to Ft Walton Beach, FL where she lives with her new family!  Scott and his Dad, Wes, have got her all ship shape again.
Very happy with the outcome for Wings.  She's 49 years old in 2017! 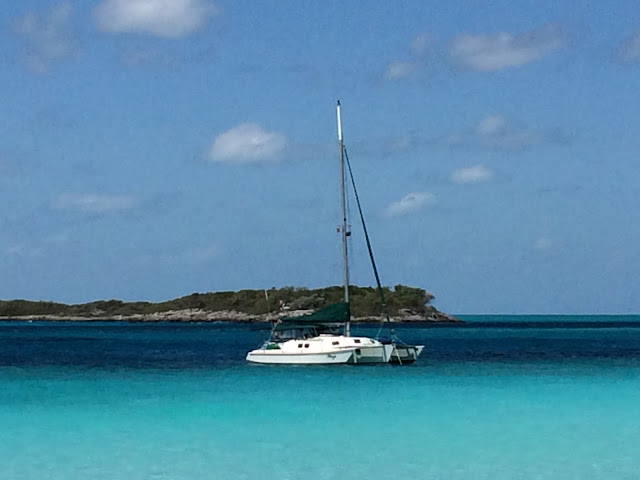 November - December 2016
Back to Austin for a visit then off for a week in West Texas before driving to Pennsylvania for Thanksgiving with Rose family (thanks Mom, Dave, Pam, and kids!).  Onto Massachusetts to visit Jess, Dave, and Nancy (thanks y'all!); then Virginia to see Herb and Gayle (thanks again!) down to the Florida panhandle to retrieve some tools from Scott, back to Houston briefly (thanks MA and Laurent!) and now we're back in Austin.  Whew!  Currently staying with Lee and Patti, huge thanks to them! 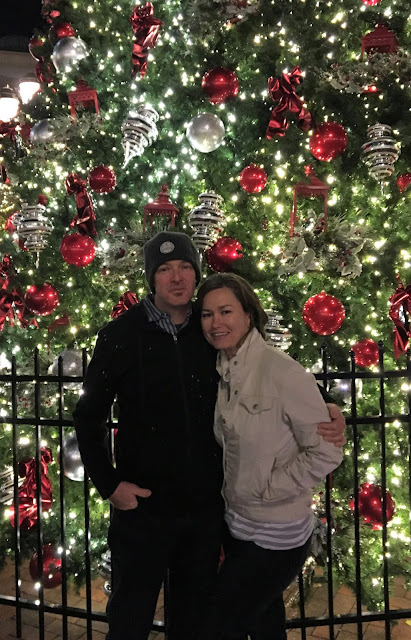 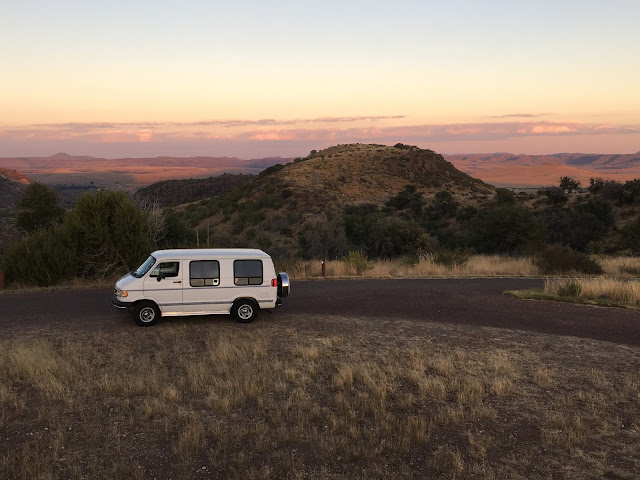 Posted by ontheroadwiththeroses@gmail.com at 11:32 PM 0 comments

Goodbye Bahamas, Thanks for the Memories

We get up in darkness to navigate out of the marina and (typical of our luck lately) discover a storm is approaching.  By this time Angie has become an amateur meteorologist, consulting multiple weather, wind, and radar apps.  We wait an hour to let it rumble on.  At least it's not going our direction but hours are precious when you need to travel almost 80 nautical miles and want to reach your destination by dark, well before dark...

80 nautical miles doesn't sound like much.  You can drive your car 80 miles an hour what's the big deal?  Well, depends on your boat.  There are power boats that blast back and forth across the Gulf Stream just to go fishing for the day.  Not ours.  Top speed under power and our average sailing speed is 7 knots (which is great for a sailboat).  Also, a nautical mile equals 1.15 land miles so we're looking at a full day.  With the help of the Gulf Stream current we should make 7 easily and probably more but we plan conservatively, hence the early departure.

Just getting out of the marina, in the dark, got us sweating.  You'd think the entrance would be all lit up and marked.  Nope, just piles of dark jagged rocks on either side and a nice little jog to the left at the end.  We successfully get out into the small channel and look for the buoys we saw on the way in.  Ha!  No lights on those either!  That just isn't the Bahamian way.  Which I can kind of understand.  Why invest too much in something that's just going to get carried away in a storm eventually and why would you be out here in the dark anyway?  We pass thru a few anchored boats, most of which have their anchor lights on, and one of them appears to be our friends, First Look, but it's too early to hail them.  Sadly we never actually met them in person!

Bimini is now in our rearview.  We head into the darkness almost straight west for a couple of miles until we know we're in deep water and begin to turn slightly northwest.  Soon we'll pick up the Gulf Stream current which will help propel us north.  The Gulf Stream is a current that runs up the east coast at anywhere from 1-3 knots, depending on the time of year.  It can also be closer to Florida or the Bahamas depending on the season.  Because of the current running north it's best to cross with a wind direction that cooperates with it.  If the wind is blowing against the stream it becomes a washing machine.  Basically, never cross when the wind forecast has an N in it.  We had waited for an east/southeast breeze.

The wind was light, as we left, but after sunrise it picked up enough that we actually got to haul up the sails!  Once we hit the stream we turned northwest and picked up speed.  So far so good.  Decent wind, mellow waves on the stern, and a nice 2-3 knot kick from the stream.

I don't remember exactly what time we dropped anchor in West Palm Beach but with all the elements finally working in our favor we made it easily by mid afternoon.  Navigating the inlet, ICW markers, and boat traffic was harder than the Gulf Stream but I won't bore you with all that.  We were exhausted but it was a great day and we had succeeded in bringing the 4 of us safely back to Florida.  In 2 days Wings would be hauled out for repairs.

We owned Wings until October but this was the last time we actually sailed her.
It was fantastic and somewhat bittersweet to look back upon.  We touched 11 knots a few times on the return from Bimini.  The fastest she ever went for us and it was effortless and smooth.  At the time we didn't know that we'd never
get another opportunity to sail her. 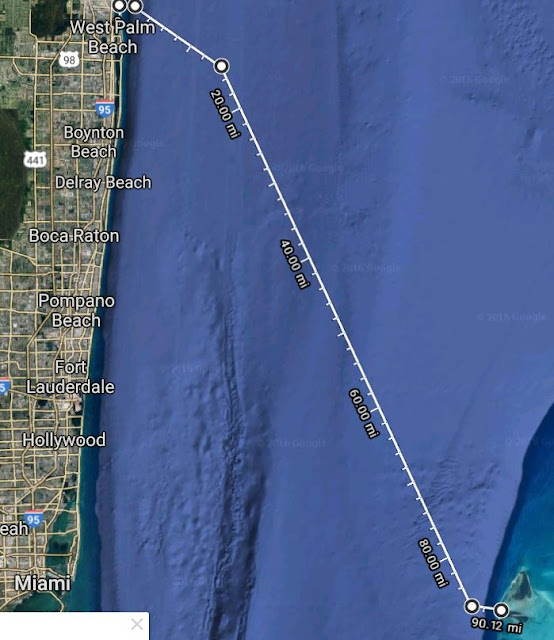 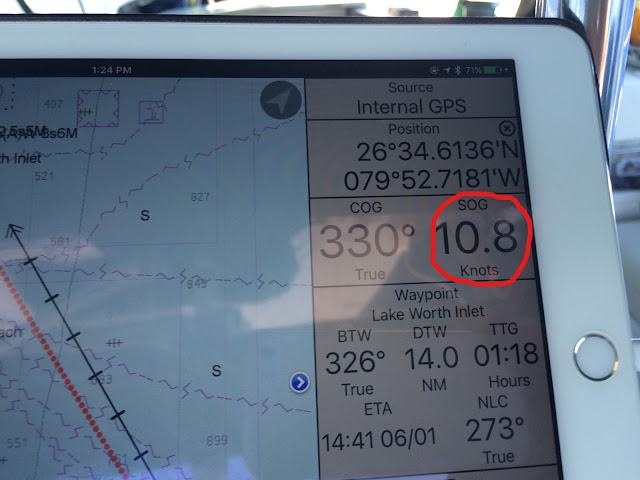 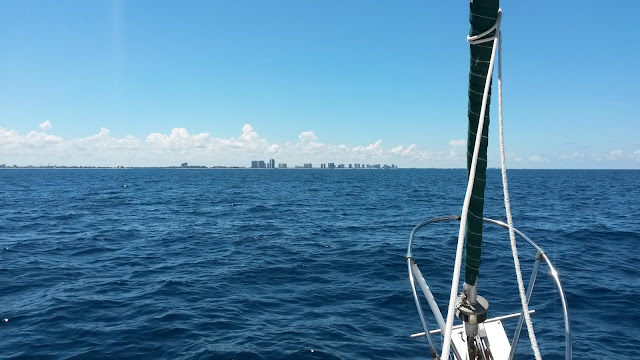 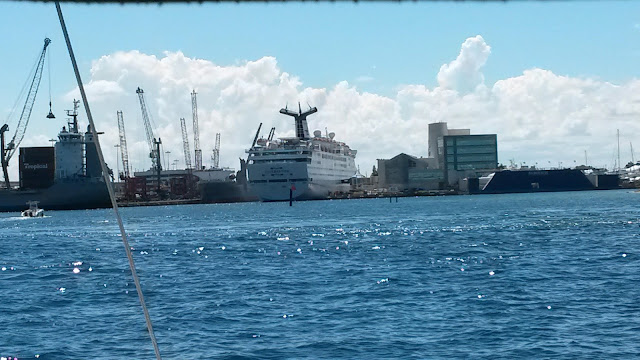 Posted by ontheroadwiththeroses@gmail.com at 7:11 PM 0 comments

You think of travellers as bold, but our guilty secret is that travel is one of the laziest ways on earth of passing the time. Travel is not merely the business of being bone-idle, but also an elaborate bumming evasion, allowing us to call attention to ourselves with our conspicuous absence while we intrude upon other people’s privacy - being actively offensive as fugitive freeloaders.

Twenty years from now you will be more disappointed by the things you didn't do than by the ones you did do. So throw off the bowlines. Sail away from the safe harbor. Catch the trade winds in your sails. Explore. Dream. Discover.